This past weekend I got the opportunity to visit the city of Las Vegas for a music and arts festival called Life is Beautiful. It’s three days of music, art, food & comedy. Sounds like a dream, right? Well it is! If you ever have the opportunity to attend, I highly recommend it. Leading up to Life is Beautiful, I kept telling myself I was going to research all the food that was going to be at the festival & I would set up a plan of attack, so that when the gates opened on the first day I would be ready. Similar to most of my other overly ambitious plans, this one floundered. But that’s okay, in the words of Tim Gun, I’ll “make it work”. My new plan of attack? Show up early on day one to get a lay of the land. That combined with my foodie intuition seemed like enough to get me where I needed to go. The food scene at Life is Beautiful is a mixture of LA & LV food trucks & restaurants serving up festival favorites to hungry music lovers.

This year the festival took a fun approach to the food. Utilizing all the incredibly talented chefs that occupy Las Vegas, the festival added a new culinary experience to this year’s lineup. The Cookout, curated by Chef Justin Kingsley Hall, was a culinary experience not to be missed. The Cookout featured a revolving list of chefs, cooking over roaring wood fires with new dishes every day. Each dish was offered in limited quantities & was only available until they sold out.  The chefs included in the live fire experience lineup included: Chef Brian Howard, Chef Khai Vu, Chef Mike Minor, Chef Roy Ellamar, Chef Hemant Kishore, Chef Vincent Rotolo, Chef Justin Kingsley Hall & Chef Johnny Church. I was fortunate enough to try dishes by Chef Khai Vu & Chef Vincent Rotolo, but more on that later. The full menu as well as information about each chef can be found here: Live Fire Experience

In addition to The Cookout, food trucks & restaurants, the festival also featured a Cocktail School & exclusive culinary experiences. All the information about the complete culinary lineup can be found here: Full Culinary Lineup 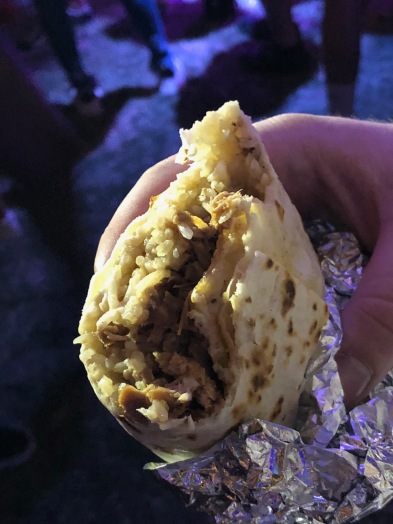 White Rabbit is an LA based food truck specializing in Filipino fusion. My boyfriend is a big fan of the White Rabbit truck so I already knew we would be paying them a visit, day one. This is the Chicken Adobo Burrito which comes with garlic rice, cheese and a fried egg. The flavors in this burrito are beyond delicious. The chicken is savory & sweet, with just enough creaminess from the egg & cheese. Truly a fantastic combination. 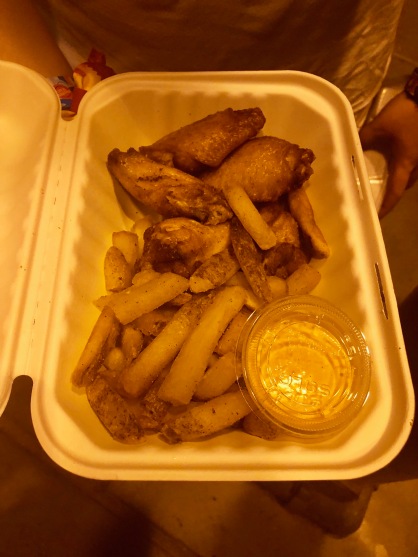 District One is the brainchild of Chef Khai Vu, who was also featured on The Cookout lineup. District One was serving up classics with a twist like Oxtail Poutine & Wings with Sriracha Ranch. If there are wings on a menu, I will most likely be ordering them. I will admit it was hard to pass up Oxtail Poutine, but a good crispy on the outside, juicy on the inside wing is really a thing of beauty. And that’s exactly what I was served up by District One. 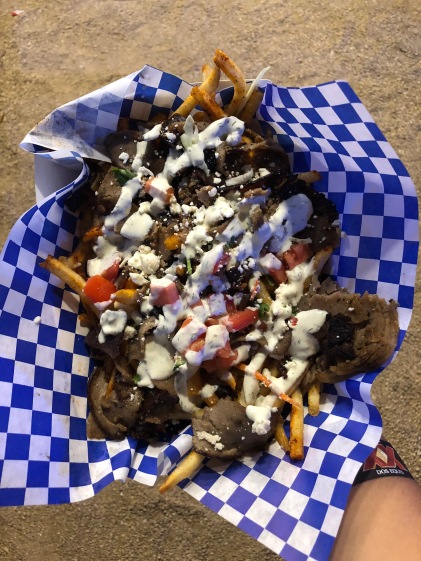 Easily the most surprising and most delicious meal of the day came from the Middle Feast truck, also known as The Food Network’s “Great Food Truck Race” Season 5 winners. These LA natives are serving up Mediterranean favorites with the volume turned up. I tried the Loaded Gyro Fries. A pile of crispy fries topped with savory gyro meat, signature sauce, feta cheese & chopped tomato. The fries were filling, very well-seasoned & had a fun spin on a classic Mediterranean dish! 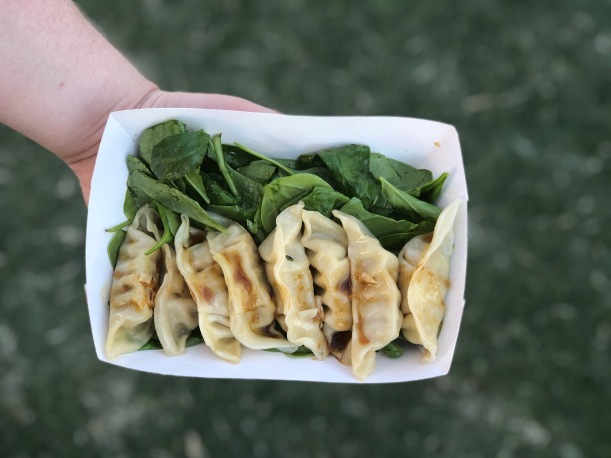 Bling Bling Dumplings have been a Life is Beautiful staple. I tried bling bling three years ago when I attended the festival for the first time. I was instantly hooked. The dumplings were juicy, flavorful & came with a refreshing & light spinach salad. My second year at the festival I knew I wasn’t leaving without getting an order of these bad boys. This year was no exception. These are a combination of the Ginger Pork Dumplings and the Thai Basil Chicken Dumplings. Their menu also features a delicious vegetarian option that utilizes mushrooms as the main ingredient. 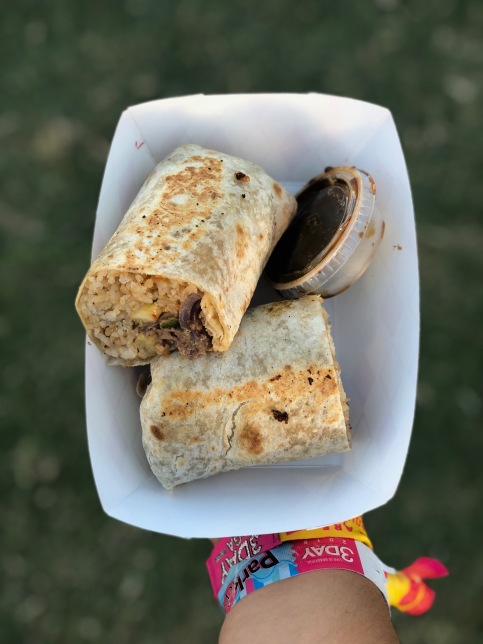 The Truk N Yaki food truck is a Las Vegas based food truck serving up Japanese teppanyaki-hibatchi style street food. I tried the Steak Burrito which was a delicious combination of steak, rice & vegetables. The steak is seasoned with salt, pepper, garlic butter, soy sauce & sake. It’s perfect inside a large flour tortilla accompanied by fried rice and stir fry veggies tosses in a spicy aioli. It was the perfect one handed dish to enjoy while jamming out to Cold War Kids. 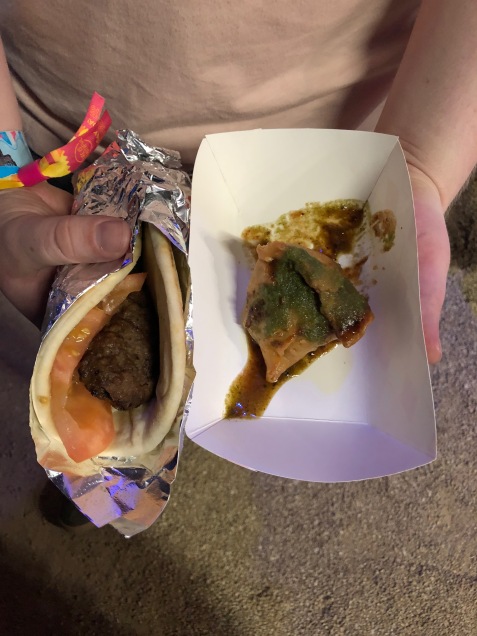 A girl can never have too much Mediterranean food in one weekend so I knew I had to make a trip to Shiraz. Shiraz is dishing up tasty Persian, Indian, Pakistani & Mediterranean cuisine to the people of Las Vegas. I ordered a Beef Kebob Wrap and a Vegetable Samosa. The wrap was perfectly simple. A warm pita, filled with a beef kebob, tzatziki sauce, chopped red onion & sliced tomato. The samosa was crispy on the outside and creamy on the inside. The vegetable filling was strongly flavored with just enough of a spicy kick to remind you of those bold Indian flavors. 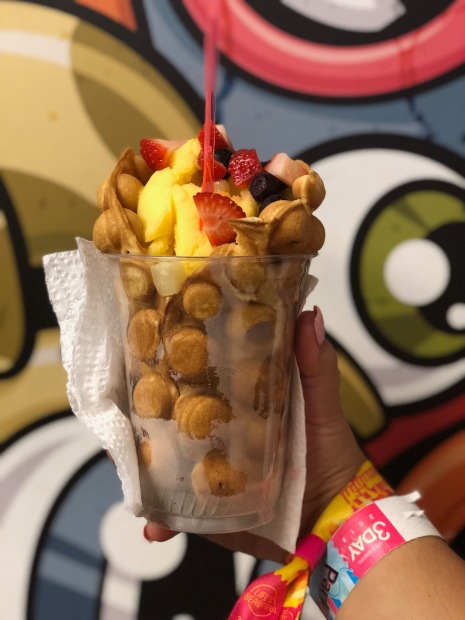 The festival inhabits the streets of downtown Las Vegas which encompasses an area called Container Park. Container Park is an open-air shopping center with boutique shops, lively bars, unique restaurants & live music. It’s really a fantastic place to hang out. Inside Container Park lives a cute little bubble waffle & gelato shop called Waffelato. If you’ve never had a bubble waffle, I highly recommend you find yourself one as soon as possible. Gelato is delicious on its own, but when it’s served in a warm and spongy bubble waffle & topped with fresh fruit? Over the top. This is the Tower of Pisa, mango sorbet topped with fresh strawberries, blueberries & pineapple all served up in a freshly made bubble waffle. 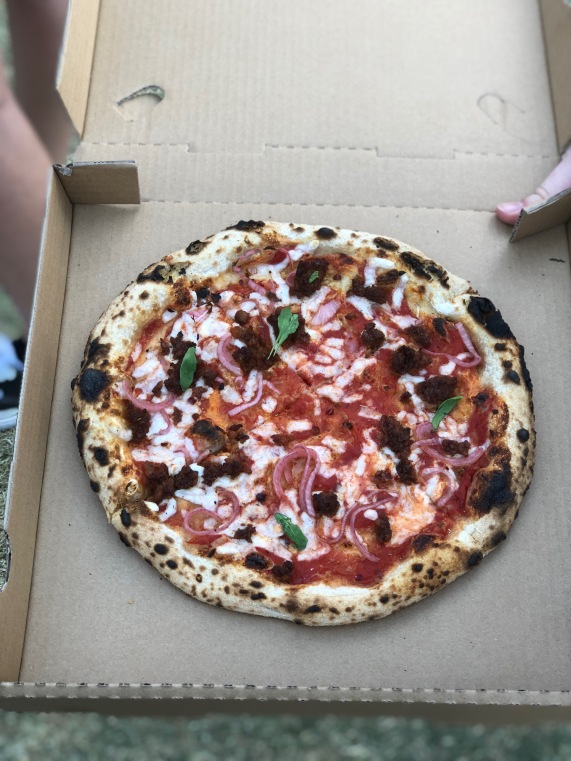 I’ve only tried vegan pizza for the first time a few weeks ago, but when I saw it on The Cookout’s menu, I knew I had to try it. There was a large pizza oven included in the Live Fire Experience, pumping out delicious wood fired vegan pizzas. The pizza was topped with vegan cheese, San Marzano tomato sauce, pickled red onions, fresh basil & vegan meatballs. The crust was crispy on the outside & chewy on the inside with a hint of charred flavor from the wood fired oven. The cheese was creamy and the sauce was robust. What more could you want out of a pizza? 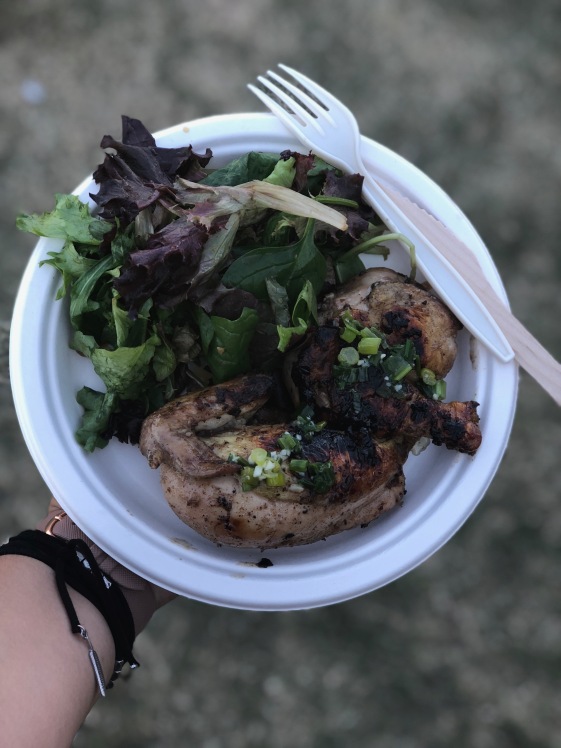 One stop at The Cookout was not enough so I went back later on to see what Chef Khai Vu was cooking up. His offering consisted of grilled Cornish Hen marinated with five spices, honey & lemongrass. It was served up with a green field salad topped with a ginger soy dressing making it a complete meal. The Hen was so flavorful and so juicy, it was grilled over an open flame giving it that added smokiness so associated with open flame cooking. The salad was fresh and light, a great compliment to the Hen.

I closed out my weekend with a favorite of mine. Shake Shack. If you’ve never heard of Shake Shack it’s a burger joint that’s been serving up insanely juicy burgers and impossibly creamy shakes all over the country, since 2004. Fun fact: Shake Shack actually started as a hot dog cart in Manhattan. I ordered a double Shackburger & fries, with extra Shack Sauce (aka fry sauce). The burger was juicy as ever, hot, cheesy & meaty. All the makings of a perfect burger. And it was a perfect was to close out my weekend of culinary adventures!

View all posts by mymillennialkitchen

Hey guys! I’m Ashley & I love to cook! I want this blog to be a place for millennials (& non millennials) to come for inspiration, guidance in the kitchen or ideas for delicious recipes! I hope you enjoy!